Give today & your donation will be DOUBLED!
*all gifts will be matched until 12/31! Join Our
Mailing List 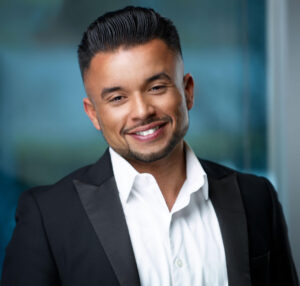 Raul Lopez has lived in San Diego his whole life; but, he has traveled far in his journey from lost teen to thriving businessman.

Raul found transcenDANCE Youth Arts Project in 2007 when he was a sophomore in high school. Pursuing his love for dance and theater, Raul auditioned for and joined transcenDANCE’s CREATE Program – and so began his 15-year relationship with the creative youth development organization. Most recently, Raul has made a generous pledge of $5,000 toward transcenDANCE’s Giving Tuesday campaign so that more students may have the same transformative opportunity that he did.

Raul’s first year in the CREATE Performance Group, transcenDANCE did not have its own studio, so rehearsal was held in Hoover High’s theater three times per week. The following year, however, transcenDANCE moved into its first dedicated dance space in City Heights – two houses down from Raul’s own home. Despite the proximity, Raul said that the studio was his “home away from home back then.” He and other students “spent so much time there – hanging out, dancing, being our crazy selves – even eating meals there. We loved to be there all week long.  It was a comfortable, safe place where we had so much fun.”

Before finding transcenDANCE at age 14, Raul recalls feeling lost, unsure of where he belonged or who his friends were; lacking in direction and purpose. “But once I joined, all of a sudden, I had a purpose. I found friends that brought out the best in me. People who remind me to this day who I am and what my accomplishment are,” Raul said. Most of the friends he met during his time at transcenDANCE are still his friends over a decade later, “the love and friendship and strong bonds are still there.”

Raul credits the reflection process and creative outlets taught by transcenDANCE programs in helping him through a series of challenges and losses he has experienced in life. In 2010, when his grandfather passed away, Raul choreographed a tribute to his late relative and performed it in front of a live audience during the program’s final performance. According to transcenDANCE Co-founder and Director, Cat Corral, “I still remember the dance vividly. Raul stepped into a place where it was just him and his grandfather’s spirit within him. It was the highlight to that year’s show. It electrified the audience and brought them to their feet in an explosive standing ovation. For a student, that reaction from the audience and the knowledge that they are valued brings with it confidence and sense of self – those are the moments that fill a student.”

Then, in 2012, Raul lost his beloved great-grandmother, the ‘mother’ whom he had lived with and who raised him.  To memorialize her, Raul again choreographed a piece for that year’s final performance. Both the process and the performance were healing for Raul, “She was my mom and I lost a big chunk of myself when she passed. I learned how to deal with that loss by bringing my grief and my experience to my artistry and releasing it through creative expression.” The duet and digital photo effects of the piece again left a mark on the audience, bringing many to tears.

Raul also speaks of his growth as a leader through his experience as a choreographer, “I had to step up and learn how to lead by example. It was clear that if this piece was important to me, then I had to lead.” The leadership training and support systems provided by transcenDANCE guide students in navigating adolescence and act as opportunity generators for college and careers. “This is what we strive for,” Cat explains, “creative youth development is the process of engaging youth through the arts to promote personal well-being and development as young artists and leaders who uplift their communities.”  Strengthened by the safety net provided by transcenDANCE, Raul also improved his academic situation. While at first, he had struggled in high school, Raul was determined to change his academic standing. He transferred to Garfield High School, caught up on his credits, and finished at the top of his class.

After giving the graduation speech as valedictorian of his class, Raul took off into the world – eager to learn more about himself and to pursue a new purpose. After a year at college, Raul joined the workforce, trying various jobs in different industries, “I wanted to find my weaknesses and find my strengths; to find out who I was.”  After several years of exploring, he met a mentor in real estate who recognized Raul’s talents for honesty, empathy, and understanding people.

“He told me I’d be good at Real Estate because I’m so interactive and genuine. So, I pursued it. I found other mentors, spoke with entrepreneurs, learned about positive mindset and affirmations, and observed what it takes to be successful. And it took off from there.” For the past four years, Raul has leveraged his mentor relationships and capitalized on his talents to create a thriving, successful real estate business in San Diego.

Raul believes strongly in the ideas of service, mentorship, and giving back, “I surround myself with successful people that work hard, but aren’t greedy. They are the ones who know how important it is to reach back and pull someone else up. As my close friend and mentor, Scott Evans, told me: It’s our duty to give back. We are blessed and we bless others. I never want to forget where I came from. I always want to stay that same, weird, funny person. But I’m not afraid to put myself out there, and I attribute a lot of that to my time with transcenDANCE.”

All donations made to transcenDANCE between now and December 31st will be matched by the generous contributions of Raul and other transcenDANCE supporters, until a goal of $55,000 is reached. Click here to give now!

transcenDANCE Youth Arts Program guides young people in underserved San Diego communities to transcend barriers, expand their ambitions, and create positive change for themselves, their families, and their communities through dance and performance. The unique CREATE program combines social change and the expressive arts with mindfulness, counseling, and mentorship.